You are using an outdated browser. Please upgrade your browser to improve your experience.
by Bryan M. Wolfe
June 10, 2010 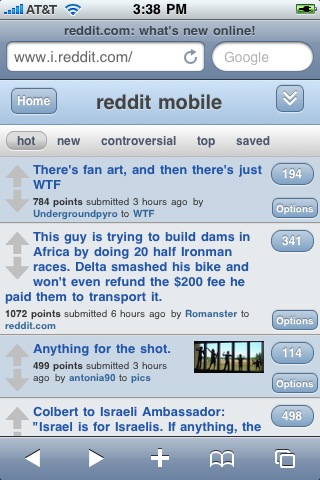 After increasing frustration in dealing with Apple’s app review process, the folks behind Reddit have released a beta of its new mobile website, which basically looks to kill its 99 cents iPhone app.

According to the site’s press release the new site will include: Although Reddit continues to make available its iPhone app, it is clear that further updates to that product are unlikely, based on  this jab at Apple:

Mostly, dealing with the app store is a royal pain in the ass...As such, our development is based around the radical notion that we can deploy bugfixes to site problems in less than a fortnight. This is not the case with the app store (quite the contrary actually).

The new site relies on the WebKit, so it will work perfectly well (as betas go) with Safari and Chrome browsers, although others browsers might see slight issues or limits.  Users that would like to test out the new site should visit http://www.i.reddit.com on their iPhone. Reddit is owned by Conde Nast Publications and released its first iPhone app in early 2009.   The site allow users to post stories which are then given thumbs up or down, depending on how well readers like the story.