You are using an outdated browser. Please upgrade your browser to improve your experience.
by Alexander Vaughn
June 2, 2010 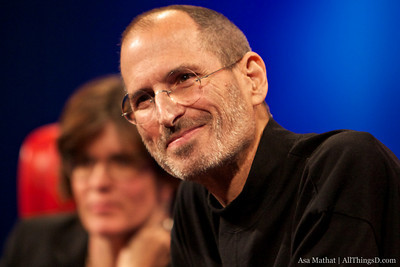 Steve Jobs was at the AllthingsD conference last night talking with Kara Swisher and Walt Mossberg. Like all his previous appearances, it is making headlines. Steve was frank, funny and great as usual. While he didn't reveal his product roadmap for the next 5 years, he did give us some insights into a couple of recent matters, as well as some historical details. Here are some notes on what he said:

Steve hasn't changed his position about flash which he believes to be an obsolete technology at the end of its product lifecycle. Apple would rather allocate their resources on upcoming technologies like html5. If people don't like it, they don't have to buy an Apple iDevice. Recent sales are proving this was the right choice. It's the same philosophy you'll find in Thoughts on Flash by Steve Jobs.

As for the tech version of the chicken or egg causality dilemma, we finally have an answer. Steve wanted a multitouch display he could type on, the iPad. He asked his engineers and UI experts to show him what they could come up with and he was pleased with their results. He decided, however, to use the technology for the iPhone first as it was more of a pressing need and postponed the iPad for later.

Steve doesn't see this competition as a platform war. Yes, Apple is competing with Google, but they're not going to leave Google out of the iPhone because of it. Also, if you look at Smartphone numbers, Apple is third and Google is fourth so it's not a big deal right now. As to whether Steve Jobs feels betrayed by Eric Schmidt, he was quoted as saying "My sex life is pretty good" so it looks like he's not overly concerned.

Apple has recently changed its policy concerning mobile analytics companies. The story behind this change is an interesting one. Remember when Flurry released their data showing Apple is testing new OS's and devices on its campus last January? Well, as you can imagine, Apple was very angry about it and decided to limit analytics companies from accessing this data in the future. Also, these analytics are a violation of Apple's and our privacy. But who knows, maybe they'll reconsider when they cool off?

It's an amazing story that, according to Steve, deserves to be turned into a movie. He thought for a long time about what to do about it, but he's not going to let this slip. He doesn't want to stand behind this kind of theft and extortion.

Apple trusts AT&T and has frequent meetings with them. Steve said AT&T is doing their best and it can only get better. No word on the exclusivity deal. (Nice one from AT&T to mess with the data pricing right after though)

The industry works on users renting subsidized boxes from cable operators. It makes it impossible for anybody to enter the market, and Google will fail to penetrate too.

The video highlights are already available online and are an absolute must-see. You can find them at AllthingsD (link) and yes, they are iDevice friendly, a very nice touch.
Nothing found :(
Try something else