You are using an outdated browser. Please upgrade your browser to improve your experience.
by Alexander Vaughn
July 7, 2010 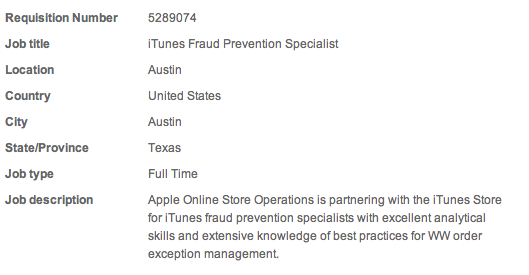 Lately, Apple's job board is becoming very up-to-date with current Apple news. You might remember the job openings for Antenna engineers in the middle of the iPhone 4 antenna crisis. Well, now the board has taken on an almost premonitory role. 9to5Mac's Mark Gurman spotted that Apple has been looking for the equivalent of an iTunes Store Sheriff for a couple days. This happened around the same time that the iTunes store has been a victim of fraud. We won't go as far as speculating whether Apple was aware of existing issues. Yet, we can agree that this would have come in handy earlier on. We've also heard more about how widespread the issue was. Apparently, only 400 accounts were compromised (or 0.0003% of the current 150 millions active iTunes accounts). It's not clear, however, why Apple hasn't undertaken to directly reimburse all the victims instead of asking them to contact their financial institution. At this time we're still unaware of how these accounts were compromised. The most obvious suggestion that these were badly protected accounts using weak passwords doesn't pan out. Is there a deeper lying issue? We don't know. Hopefully whoever takes on this new job will be able to figure that out. 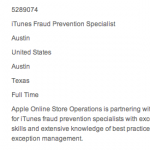 Apple Looking For An iTunes Store Sheriff
Nothing found :(
Try something else