You are using an outdated browser. Please upgrade your browser to improve your experience.
by David Foster
July 20, 2010 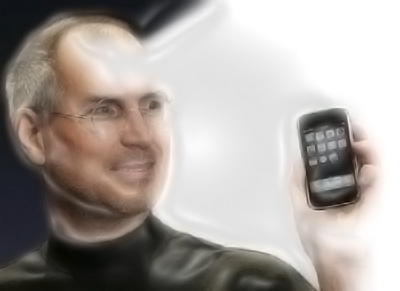 The ‘reality distortion field’ so often attributed to the magical Steve Jobs is fortunately limited by both space and time. Now that we’ve had a few days to let Apple's Antennagate press conference sync in, what do we make of the cold hard “data” that Jobs presented last Friday. Since I am a scientist, my skepticism is promptly placed on red alert whenever anyone starts an argument claiming to have performed “extremely sophisticated testing," but then fails to produce it. Since those are exactly the words Steve Jobs used just before launching into a series of arguments meant to deflect mounting criticism  that the iPhone 4 has a serious antenna-based flaw, I'm going to hold him to a higher standard. The state of affairs that lead up to the conference, which Jobs himself referred to as anntenagate, is that the ability of the iPhone 4 to receive and transmit voice or data can be diminished if the phone is held or touched in certain ways. The ‘gate’ part of antennagate stems from the fact that Apple seems content to stick to the story that it knew nothing about the phone's sensitivity to how its handled before it was released to the market three weeks ago. Oh, yes -- Apple also maintains that it really isn't an issue anyway -- at least not a major one. What problem? Apple’s claim that it knew nothing about the vulnerability of the iPhone 4’s external dual array of antennas to how the phone is handled is pretty hard to swallow. It's even harder to accept after Apple used the conference to unveil their sophisticated radio-testing facility. The facility, so secret that most Apple employees were likely unaware of its existence till last Friday, holds 16 or 17 specially constructed anechoic chambers designed to test radio devices like cell phones and iPads. Although Apple reportedly spent 100 million dollars to build and staff this facility, Jobs expects us to believe that a drawback inherent to any external antenna designed to be handled by bare hands simply eluded them. There  are several other reasons to maintain a healthy skepticism regarding how much Apple knew and when they knew it. Jobs stated at one point in the conference Friday that “we knew that if you gripped it (the iPhone 4) in a certain way, the bars are going to go down a little bit…” Got that: “a little bit.” In fact, anyone living in a region that has marginal “5-bar” AT&T service can easily demonstrate that very little skin contact on the iPhone's metal side can drop the number of bars displayed by more than just a little bit. Touching the seam on the left side of the iPhone 4 acts to connect the iPhone's cellular-radio and WiFi antennas. Under the right circumstances even the placement of a finger tip here can drop five bars in the display to one bar, or even none at all. No crushing “death grip” is required. 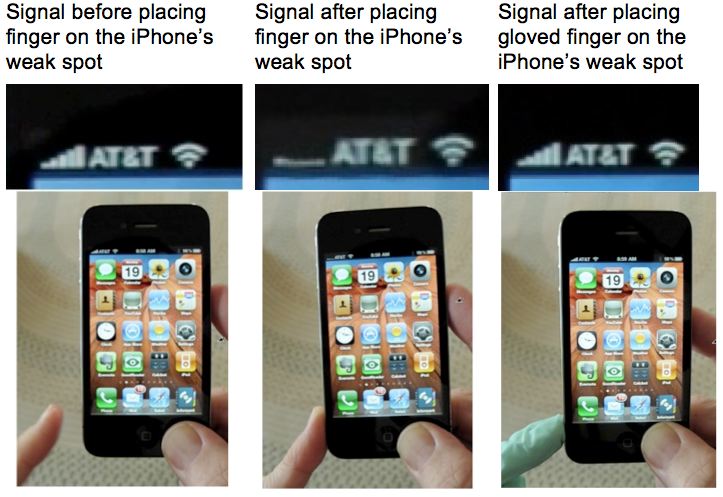 Oh, yes - we are also expected to swallow the story that over the last three years Apple entirely failed to notice that all of their iPhones incorrectly showed 5 bars in regions with weak or marginal signal strength. The recent iOS 4.0.1 update rectifies this by displaying fewer bars in more places. Steve Jobs spent several minutes at his conference demonstrating that Apple’s engineers were able to identify several awkward “death grips” that could drop the bars displayed on three competing smart phones.

Astonishingly, Jobs presented none of Apple's extensive studies in which they presumably tried to reproduce this effect with the iPhone 4. Neither did he provide any examples of how different grips or skin contact might adversely affect its reception. For the most part, Jobs left the impression that Apple still doesn’t think there is a serious problem with the iPhone’s reception in the real world, and even if there was, he asserted that you basically would get similar results with their competitors' phones. He sort of left out that that in areas with a weak signal you can easily interfere with an iPhone’s reception by just handling it naturally. To avoid dropping calls or data rates in such circumstances, you either need to consciously avoid touching the iPhone’s weak spot or clothe it in a case that prevents direct contact of the antenna junction with your skin. For me, the most discomforting aspect of Steve’s presentation was that although he talked a lot about taking the time to get “data” before speaking to the press, he really presented very little data at all. When he did present numerical data, I was left with the impression that he intended to deceive or mislead. Steve Job’s defense of the iPhone 4 was built around four major bullet points that he presented at the conference: 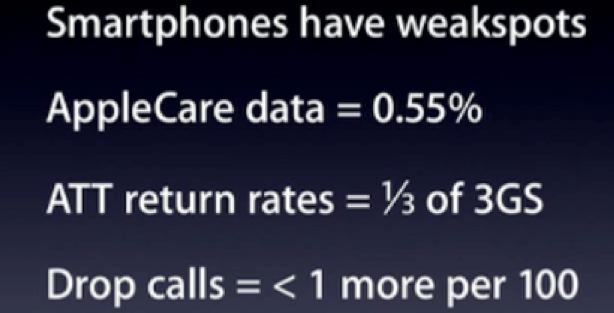 All smart phones have "weakspots" 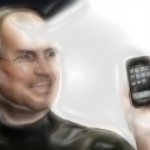