You are using an outdated browser. Please upgrade your browser to improve your experience.
by Alexander Vaughn
August 12, 2010 Today's new episode of the great  Camera+ story: Apple has now decided to pull the app. I know, it's unfortunate when apps get pulled. Yet, this time around, they really deserved it.

Indeed, after having their last update rejected for using the iPhone's volume button as a shutter, the developers of Camera+ decided to fight the decision. No, they didn't write to Steve Jobs or Scott Forstall. Instead, they resubmitted the update, but this time hiding the feature from Apple. The trick, needed to activate the hidden feature, didn't stay a secret for very long. When Apple found out about it, they proceeded to pull the app.

I'll admit, that what the developers did was a lot of fun, and it brought them quite a number of sales too, as the app reached the App Store's top five. However, the Camera+ developer's, were already making over $250,000 a month from this app. That's a revenue stream they have now lost. When you think about it, that wasn't very smart. Especially, when you consider they might not be able to have the app re-approved any time soon.

Did you get around to grabbing it in time?

9to5mac notes that there is an official policy concerning Easter Eggs on the App Store. They're allowed, but Apple must be informed about them during the submission process: 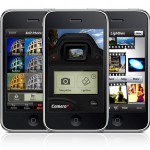 Apple Pulls Camera+ Over VolumeSnap Easter Egg
Nothing found :(
Try something else