You are using an outdated browser. Please upgrade your browser to improve your experience.
by Alexander Vaughn
August 17, 2010
Remember Paul Shin Devine, Apple’s Global Supply manager who got caught selling Apple's secrets to suppliers? Well, we're learning a bit more about the story this week and, he's in big trouble. First of all, we find out that he was caught during some sort of internal investigation at Apple this past April. That's actually around the period when Gizmodo leaked the iPhone 4, but who knows if that's what triggered the audit? As for the proof that he was leaking things, it was found in his personal Hotmail and Gmail accounts that "Apple's investigators" apparently didn't have much trouble accessing. Also, it happened to contain an Excel spreadsheet of the kickbacks he was getting. Then, just in case this wasn't enough, one of Apple's suppliers, Pegatron, came forward and admitted it did pay kickbacks to some shady company to help land contracts. However, Pegatron didn't identify who was behind that company. Guess they're not scared Apple will get back at them. Or, they really are, as rumored, producing the Verizon iPhone. Meanwhile, Devine is pleading not guilty. 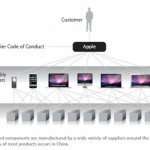 Apple Supplier Confirms Paying Kickbacks
Nothing found :(
Try something else