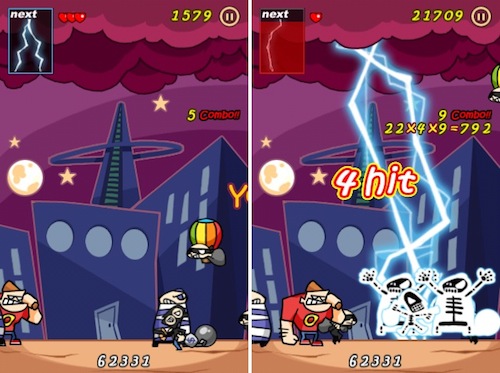 Have you ever wanted to have the power to stop bank robbers and other thieves. Well you can have the power of God in God Strike from the makers of Infection: Zombies, now known as Infect Them All. You're given the power of lightning to strike down all kinds of criminals eloquently known as bastards. 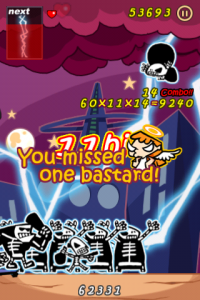 The game fits in the casual endless mode as you strike bad guys as long as you can, but when you let five make it through it’s game over. There are 13 types of lightning that vary in shape, size, and power, and there are six types of enemies. OpenFeint is included for online high scores and achievements.

The game is simple, fast paced fun trying to strike as many bastards as possible. You simply drag from the clouds to where you want it to strike the ground, and whoever the lightning hits gets zapped. The longer you last without losing lives the more enemies there will be at once, and more of the challenging enemies. 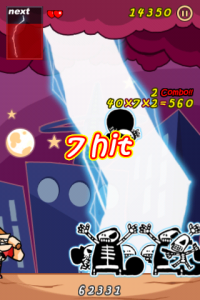 There are slow moving big enemies which are easy to hit, but the fast moving small ones as well as the flying ones are very tough to strike. You need to wait for specific types of lightning or concentrate on your strikes location to hit these small ones. The lightning itself is difficult because there are 13 different types that react differently to where you drag your finger. The game is all about balancing quickness and precision to make sure you hit all the enemies, but also as many enemies at once if possible. You get bonus points for group strikes, plus you increase your score quickly by consecutive strikes hitting enemies. The game is just so easy to pick up, and so much fun to keep striking down bad guys with just a flick of your finger. 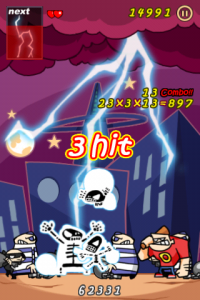 The cartoon art style is well done with a fun feel to it. It's really great seeing the different lightning strikes, and even better to see the zapped bodies as you're shown an x-ray type view. There is an action soundtrack that is mixed with varying zapping sounds and screams. The game is easy to begin, but soon you'll think the controls aren't the best, and lightning strikes have a random feel. It does take awhile to get used to and understand that where you drag from and too is always picked up, but depending on the eluting formation dictates where it goes. You need to look at the upcoming lightning, and see how it's shaped, and then over compensate for its direction. 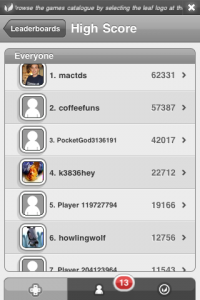 The game isn't simply drawing the lightning like you would in Pocket God. There are certain shapes it comes in, and you need to place them on the board so they hit the enemies. This could be thought of as a bad, but it adds difficulty, and once you understand it you'll see if it was any different you would never lose.

As stated above the controls can seem random when you're straying out, and this can be frustrating. Once you get a hang of the idea that there are different shaped lightning bolts there is plenty of fun to be had. Even when you do figure it out it will feel like the lightning didn't go anywhere near the way you wanted it to. 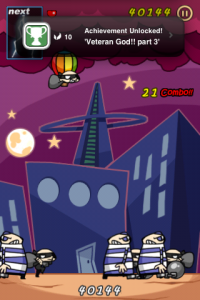 The game is simplistic like most casual endless games, and once you've played a couple of times you've seen everything. Like certain games in this genre it has a great one more time mechanic that keeps you playing the simile style repeatedly. It would be nice to see some kind of variability though. The way the game uses OpenFeint is a bit bothersome because when you get a new achievement it pops up over the clouds where you drag the lighting from. That means when you get an achievement, and then try to do lightning it opens up OpenFeint, or you can wait until the pop-up vanishes. Either way you’re missing out on valuable electrocution time, and the game doesn't pause when you go into OpenFeint.

God Strike is plenty of fun, letting you throw down the punishment to the various bastards. You get to do every aspect from catching the thief to the electric chair all in one strike (though that's too severe for robbery in the real world). It's lots of fun, and easy for everyone to enjoy as you go for striking multiple enemies at once in a consecutive streak. God Strike is worth considering because it seems to be so sparse in variability. It's a fun mechanic, but there is just so much more offered in many other games for $0.99. 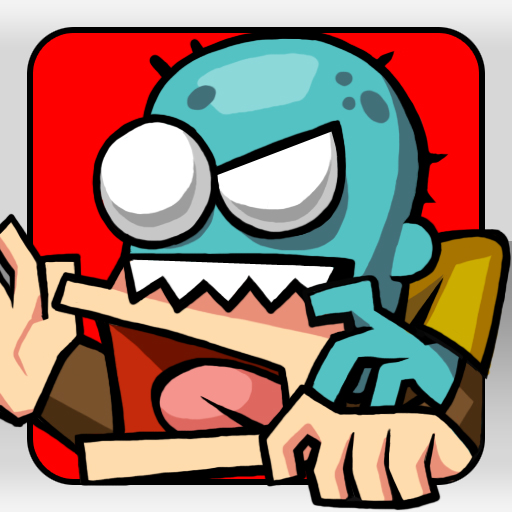 Infect Them All
Magic Cube 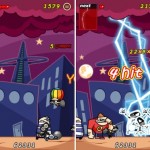 Review: God Strike - Lightning For Bad Guys
Nothing found :(
Try something else