You are using an outdated browser. Please upgrade your browser to improve your experience.
by Pivnick
August 27, 2010

I have to say, the history of the real Hipstamatic is way more interesting than the app, but that isn’t to say the app isn’t worth hearing about. Essentially, the Hipstamatic was meant to be an affordable and simple film camera back in the 80s, but it never made it to market. This app is designed to simulate the experience of actually using that camera. While other iPhone camera apps try to improve upon the digital photo experience, Hipstamatic tries to take things back to the analog days. It does this by simulating everything from an analog camera’s viewfinder, to the ability to switch lenses, flashes and film types. Fortunately, the developers haven’t totally forgot about the digital world, as the app has an option to upload shots to Facebook and Flickr, or to send pictures as emails. 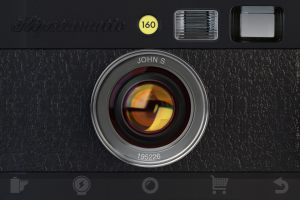 With the push of a button, you can change between views of the front of the camera to the back. We’ll start at the front, as that’s how I left my settings. The app lets you change between lenses with the flick of a finger. Each lens simulates the effects of actual interchangeable analog lenses. By touching icons at the bottom of this view, you can access a menu that lets you change the film type. And who says iPhone doesn’t support flash? This app has 6 of them! 2 are included and 4 are in-app purchases. From the camera’s rear view, you get a view finder, a large shutter button and access to your “prints.” The prints option is what you’d expect, a library of the photos you took with the Hipstamatic. The pictures look old school, and tapping on a photo gives you basic information about how the shot was taken. In that same spot, you’ll also find the convenient option to create stacks of pictures. Those are essentially analog speak for groups of photos. These are easy created and can be sent to Facebook, Flickr to friends via emails. 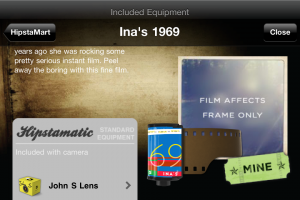 This app does a great job at simulating the experience of using an old analog camera. You have the cute old shutter sounds, the buzz of the flash warming up, and all of the options are referred to in old school terms. Your pictures aren’t processing, they’re developing. Your camera isn’t storing them, it’s printing them. The best thing about the app is it does exactly what it claims to do. It turns taking pictures with your iPhone into a fun experience. The results are rustic and generally full of surprises, such as different tints. After using this thing for a few minutes, you actually start to forget you’re using the iPhone camera. 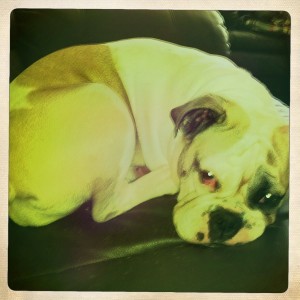 Well, this app does a great job at simulating the experience of using an old analog camera. Do you really want that? This is where the app becomes hard to review. I mean, the view finder is small, but that’s the point. The photo quality is less than ideal, but that’s the point. There’s a good lag between each picture you want to take, but that’s the point. Accepting all that, there are still some real negatives—bad pun intended. For instance, as the app notes, changing film types does nothing but change the picture’s frame. When taking pictures with flash, a visual notification implies the shot has been taken about a second before it actually happens. Then, while there are some nice sharing options, MMS isn’t one of them. Finally, and I hate to be nitpicky, but if you are going to simulate the real thing, why is the option to change film at the front of the camera? And why do you change the lens by swiping your finger across the lens, but you change the flash by selecting an icon?

My impulse is to say that it’s easier to take pictures on the iPhone’s own camera application, and that you can make your pictures look old and rustic using any number of free apps. The truth though, is that Hipstamatic is designed for the experience, not ease of use or end results. In that way, it largely succeeds. While those who really want the fun reminder of yesteryear could easily pick up a cheap analog camera in a second hand shop, I suppose most will see two bucks for the app as being the better option. The bottom line is that if you like the app based on its description, you’ll love using it. Still, it could use some interface tweaks, as noted, to complete the experience. Also, it would be nice if “changing film” actually did something practical, and an MMS option would be nice as well. 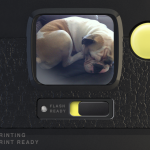