You are using an outdated browser. Please upgrade your browser to improve your experience.
by Samuel L. Lytle
September 21, 2010

In an app store of 250,000+, it seems as if it is getting more and more difficult for developers to find a fresh new idea that doesn’t instantly get buried upon approval. Therefore, many apps seem to be a new take on an old idea at least to some degree. Some is just taking a base concept and running with it (i.e. Fieldrunners spawned countless tower defense look-alikes), and others are nothing more than unashamed attempts at improving the successful. 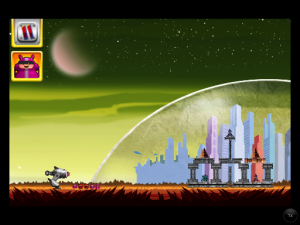 Cannon Cadets is a new entry into the app store that boldly goes where someone has gone before. Although you will not see any ‘birds’ in the game, it is nothing more than a copy of the uber-successful Angry Birds. The ‘Cadets’ theme and futuristic flavor will try and convince you that this is not a copy but rather a ‘twist’ on an idea, but this disguise is thin at best.

In the rare case that you aren’t familiar with Angry Birds or how it works, this is a brief overview. Think of a large Cannon. In this Cannon can be placed large projectiles such as birds ‘Cadets’. Pull back the slingshot Cannon with your finger at a given angle and watch as it sails through the air to destroy the pigs aliens. Physics based collisions determine if you the structure that the enemy is on/under collapses and hopefully kills them. You have a handful of projectiles to shoot at the enemy to kill all of them or you fail and have to retry the level.  As you progress through the levels you receive additional birds that have unique powers like receiving a boost if you touch the screen when they are midair. 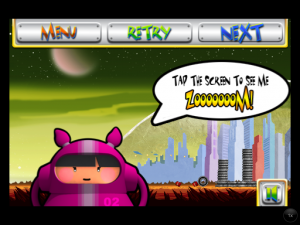 CC also has a feature where you have to shoot flying saucers through the air to collect these gold coin sort of things. I think this is to unlock new planets, but I’m not sure because it never told me. I just shot them when they came and eventually new worlds were unlocked. The Good The fact that this is a blatant copy on an absolutely fantastic game is unfortunate because Cannon Cadets actually has some potential. Physics is always fun and the challenge level is fairly good (not too hard or too easy). There is enough levels at 80 to justify the cost, and the graphics and animations are decent. Some levels have a 'Rube Goldman' feel, which is a surprisingly refreshing addition.  Bombs also provide some fun explosion action. The Bad I’ve heard that girls will keep friends around that they know are less attractive so that they can feel better about themselves. The opposite of this principle keeps Cannon Cadets from succeeding at any level.  When compared against Angry Birds, it just feels awkward, sloppy and disingenuine. Where AB has an incredible soundtrack, CC has random burp and fart sound effects. Where AB has unique and fun bird personalities, the Cadets seem rather rigid and robotic. Where AB was incredibly original, CC is, well… 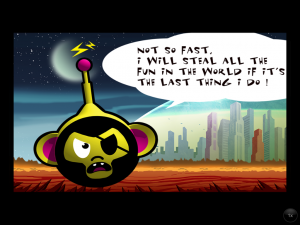 The levels feel very much thrown together without rhyme or reason.  Sometimes it looks like a big pile of logs and blocks with Aliens mixed in for good measure.  Another area where this game absolutely fails is that not only does it not have OpenFeint, it doesn’t have any method of score keeping… AT ALL! This is inexcusable and dramatically impacts replay ability. Cannon Cadets also is also very buggy on the iPad since the retina display update. If I don’t convince you to steer clear of this application, buy it for you iPhone/ iPod Touch. The Verdict The potential seen and glimpses of fun experienced in Cannon Cadets is powerfully overshadowed by sloppy game play, lack of features and a heavy dose of unoriginality. When you include the face that the iPhone version cost twice (2 TIMES!) as much as Angry Birds, all excuses for contemplating the purchase of this game are eliminated. If you want my App Advice, make like a Space Cadet and stay far, far away from this application. 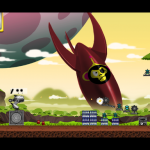 Review: Cannon Cadets- Like Angry Birds?
Nothing found :(
Try something else