You are using an outdated browser. Please upgrade your browser to improve your experience.
by Alexander Vaughn
September 30, 2010
Good news folks, today the first Apple TV shipments are making their way to those who pre-ordered as well as Apple stores around the US. This is allowing us to find out more about the device. The most interesting discovery of the day is that not only does the Apple TV come with a USB port, which allows you to connect it to your computer, but it actually appears as a device in iTunes, which you can restore yourself. Let's just say that the Apple TV is asking to get jailbroken. Even better, according to info received by TechFlash, jailbreakers have already found a way to put the device in DFU mode (needed to flash custom firmware), and are trying to jailbreak the device right now:

We just received word from independent iOS hacker @StealthBravo that DFU mode for Apple TV has been discovered and that p0sixninja and greenpois0n have already begun their work on implementing a jailbreak. This should be a very interesting evening.

We already know that Apple TV is very similar to the current generation of iDevices in its architecture. So unless they hit some major issues, we might soon be running unsigned code and apps in our living rooms. 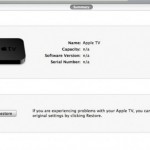 Apple TV Can Be Restored In iTunes, Jailbreaking Efforts Begin

Apple TV Can Be Restored In iTunes, Jailbreaking Efforts Begin
Nothing found :(
Try something else