You are using an outdated browser. Please upgrade your browser to improve your experience.
by Bryan M. Wolfe
September 8, 2010
Apple's revamped Game Center has just been released along with iOS 4.1, and it has left some Apple device users behind. According to Apple, the social gaming network will be available for the iPhone 3GS, iPhone 4, and second-, third-, and fourth-generation iPod touch models. This leaves out users of Apple's original iPhone, iPhone 3G, and the original iPod touch, which are not supported. Of these, only the iPhone 3G actually supports installation of iOS 4. The service will also not work on the iPad, until its version of iOS is updated in November. Of course, you'll need to download and install iOS 4.1 for Game Center to work on the compatible devices.

According to MacRumors, the original iOS 4.1 betas allowed Game Center support for all iOS 4.1 installations. However, that was revised last month. MacRumors said:

It appears that, after further review, Apple has decided to restore the functionality to the second-generation iPod touch but not the iPhone 3G, which has seen a number of performance complaints under iOS 4 with improvements in that regard reportedly coming in iOS 4.1.

Game Center, which was announced last spring, allows developers a way to enhance their game app user's experience with social networking features. These include leader boards, friend invites, challenges, and matchmaking. For more information on Game Center, please read our article on the new service. In addition, visit Apple's own Game Center page. 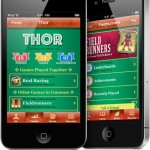 Game Center Won't Work On Legacy Devices
Nothing found :(
Try something else