You are using an outdated browser. Please upgrade your browser to improve your experience.
by Alexander Vaughn
September 3, 2010
Net Applications (a consulting company that, among other things, measures online browser usage), just released some new data concerning iOS, Android and Linux. Apparently, the recent growth of Android is still far from enough to make it the most prevalent platform online. Apple's iOS is still used for five times more visits on the 40,000 websites covered by the survey. Also, thanks to Linux losing some presence, we can now say that iOS is used more than Android and Linux combined. What does it mean? Well, first of all, it seems like iOS owners browse way more on their devices than Android owners do. This could be caused by the iPad of course. But, we could also speculate that the experience is more compelling on iOS, as mobile Safari is an excellent mobile browser, therefore pushing people to use it more. Secondly, at the moment, you can access a much greater number of services and content on the iPhone using apps. Android owners have to rely on their browser more often, which makes the disparity even greater. Furthermore, we can draw a parallel to Flash. Detractors blame iOS for not including Flash and therefore jeopardizing the web experience. Apparently that isn't so, and the fact that iOS browsing is getting bigger will push content providers to be even more interested in providing html5 content rather than Flash; thus creating a positive feedback loop. 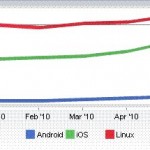