You are using an outdated browser. Please upgrade your browser to improve your experience.
by Tyler Tschida
September 2, 2010
You watched Steve Jobs talk about them, you read about them on our live feed, and you may have even already pre-ordered one of them; but now it's time to finally get a more in-depth look at the three new iPod models that Apple unveiled today. iPod shuffle There isn't a whole lot of new here.  The 2010 iPod shuffle is basically a return to form, albeit a slightly smaller form.  The difference in size between this and previous click wheel models is nearly indistinguishable, so really all you are getting is a previous shuffle with VoiceOver.  The click wheel operates and feels just like previously models, the five colors are as vibrant as ever, and you can clip it anywhere for convenience. iPod nano The new iPod nano will certainly appeal to the on-the-go crowd thanks to its thinned out and much lighter body, but what makes it really stand out is the capacitive multi-touch display.  The screen is clear, crisp and extremely responsive.  Flipping through pages is just as fast and easy as it is on the iPhone or iPod touch, although you only get four icons per page.  Apps pop open relatively quickly, and display a fair amount of information even though the screen is rather tiny.  Instead of having users scroll through long lists of songs, artists, and playlists, Apple broke each category up into separate apps, further helping users deal with the smaller display. Navigation can take a bit of getting used to, however, since we, the iPhone and iPod touch generation, tend to look for a home button when trying to back out of an app.  With the nano, some apps allow you to swipe from left to right to get back to the home screen, while others require a tap and hold.  It's not the most obvious of design decisions, but once you get the hang of it, it works fairly well. Changing screen orientation can also be a bit of a challenge for those with larger fingers.  Since the nano doesn't automatically change orientations like other iDevices, you are required to place two fingers on the screen and spin in any direction.  The screen will spin one quarter of the way, allowing you to have four different orientations.  Just like backing out of apps, it's not an awful system, it just takes a bit of getting used to. iPod touch Besides being decked out with a perfectly crisp Retina display, front and rear facing cameras, and speedy A4 chip, the new iPod touch is surprisingly thin; something that shouldn't be dismissed.  It makes the iPhone 4, and even the previous iPod touch, feel like an overweight sibling. To my dismay, it still features the same scratch prone chrome backing with beveled edges, forgoing the iPhone 4's sleek industrial design. Just like the nano, the new iPod touch is a very worthy successor, and will no doubt make most, if not all current iPod touch owners envious of its power and features.  If you have been waiting to upgrade your iPod touch, now is the time. We have a massive gallery embedded below from today's hands-on experience.  We also have a series of videos that demonstrate some of the features for each of the three new iPods.  The only issue is that my iPhone 4 decided to use a not-so-friendly orientation for some of them.  Nevertheless, you will get the idea. [gallery link="file" columns="4"] 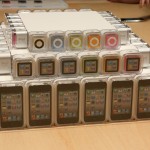 Hands-On With The New iPod Touch, iPod Nano And iPod Shuffle
Nothing found :(
Try something else