You are using an outdated browser. Please upgrade your browser to improve your experience.
by Bryan M. Wolfe
September 27, 2010
Last winter, Apple's iAd advertising program was in the planning stages. By the end of 2010 it will account for 21 percent of the mobile advertising market. This news comes from a report published by Bloomberg Businessweek. Of course, Apple's gain is a loss for others. By December, Google will see its piece of the mobile advertising market drop to 21 precent (from 27 percent in 2009). Microsoft will go from 10 to 7 percent over the same time period. Apple's CEO Steve Jobs announced the iAd network in April, and it was released in July. According to Businessweek:

Apple's push into mobile ads may be a reason for its rivals' market-share declines. Since June, the number of brands that have agreed to run ads through Apple's iAd network has doubled, said Natalie Kerris, a spokeswoman for Apple. On June 7, Cupertino (Calif.)-based Apple said it had $60 million in iAd commitments from marketers, including food and personal-care product maker Unilever (UN), electronics retailer Best Buy (BBY), and satellite-television service provider DirecTV (DTV). Unilever, whose first iAd made its debut in July, is "extremely happy" with the results of its ad campaigns, Rob Master, the company's North American media director, says in an interview. More than 20 percent of people who click on Unilever iAds—which feature video and an interactive game—check out the ad a second time, he says.

Currently, iAds are only available on the iPhone/iPod touch, but that will change soon. Apple's mobile advertising share should increase further with the introduction in November of iOS 4.2 (which enables iAds) for the iPad. iAds looks like another winner from the folks at Apple! 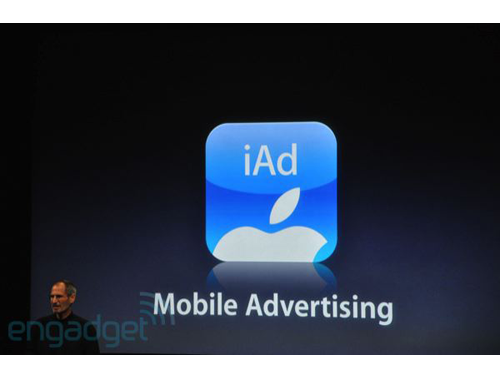 iAds: From Zero To 21 Percent Of The Market By December

iAds: From Zero To 21 Percent Of The Market By December
Nothing found :(
Try something else