You are using an outdated browser. Please upgrade your browser to improve your experience.
by Alexander Vaughn
September 10, 2010
We've already told you that the wizards of the iPhone Dev Team and their numerous friends had found a way to jailbreak iOS 4.1 long ago. It's getting even better, as they have now found yet another way to jailbreak your device, and as we recently speculated, it's at the hardware level. What this means is actually pretty amazing. Thanks to this new exploit, found by pod2g and reported by iSpazio, you should be able to jailbreak every currently existing iDevice in the future forever. Even the new iPod touch or the iPad after upgrading to iOS 4.2, and Apple can't do anything about it. Indeed, as the exploit is the iPhone's bootrom, it can only be stopped by Apple in newly shipped devices, which need to be flashed with a new version of the bootrom. So for all of you who already purchased a device, you won't have to worry about software updates anymore. 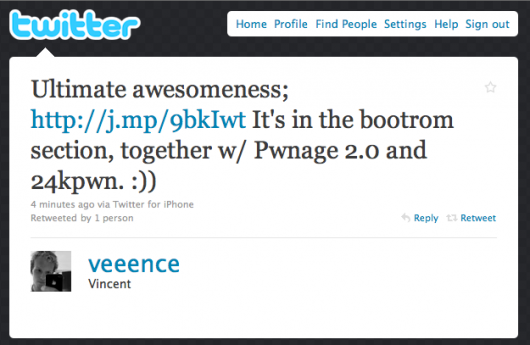 Of course, there are still many details to be taken care of and they still have a lot of work ahead. Nevertheless, we can confidently say that the Dev-team has once again won its cat and mouse game against Apple, or at least, until the next generation of iDevices.