You are using an outdated browser. Please upgrade your browser to improve your experience.
by Alexander Vaughn
September 17, 2010
Remember that great ad Newsday recently released to advertise its new iPad app? The one that suggested iPads will never completely replace newspapers, and showed an iPad getting smashed. Well, Newsday has pulled the ad and is trying to have all copies removed from YouTube as well (like the one on our original post). Newsday's only official comment to NetworkWorld was:

"We have taken the commercial 'Flypaper' down and its short, glorious run appears to be over."

As first speculated by NetworkWorld, and later apparently confirmed by a Newsday employee (who'd rather stay anonymous), Apple supposedly didn't appreciate the ad, and was behind the removal:

"Newsday got a cease and desist letter threatening all of our apps, if we did not remove the commercial immediately. They took exception to the fact that the (iPad) glass shattered into large jagged pieces ... Your instincts are correct."

Very interesting. This suggests that Apple's 13.1 rule of the iOS approval guidelines: "Apps that encourage users to use an Apple Device in a way that may cause damage to the device will be rejected" also extends to advertising material. Hmm, I understand that Apple doesn't appreciate seeing its iPad getting smashed, especially if the video goes viral like this one. However, taking control of people's advertising material sounds a bit too controlling. What do you think? Here is a copy of the ad that survived, for now: 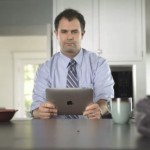 Viral Newsday iPad-Kills-Fly Ad Gets Pulled - By Apple?
Nothing found :(
Try something else