You are using an outdated browser. Please upgrade your browser to improve your experience.
by Arnold Zafra
October 3, 2010
What do we have here?  A BitTorrent app currently propagating through the App Store? Yes folks, IS Drive, an app that allows you to control your remote ImageShack torrent downloading account just hit the App Store. How did it get approved despite of Apple's strict allegiance to all things non-piracy? We don't know, but it could simply be a result of Apple's recent decision to be more flexible with App Store approvals. Just like they're now approving Google Voice apps. Its developers stayed discrete however as IS Drive's description only states that it "allows you to check and manage the downloads in your ImageShack Drive account." That's it. According to TorrentFreak who spoke with the app's developer, IS Drive is however clearly intended to help Torrent users manage their ImageShack's torrent downloading account, as well as to manage downloads from other torrent sites like ISOHunt or Mininova. He also mentions that he intentionally did not use the "torrent" word when he submitted the app for approval. Is that why Apple skipped it? If so, it's not going to last. Here is how it looks like:

Don't get too excited though, as IS Drive costs $4.99 and is limited to premium Imageshack Torrent Drive users, nevertheless, this is a big surprise. So what do you think? Did Apple just miss it? Or are they really becoming that permissive? IS Drive is available from the App Store for $4.99. 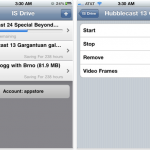 Did Apple Just Approve A BitTorrent App? Or Did it Slip Past Their Eagle Eyes?

Did Apple Just Approve A BitTorrent App? Or Did it Slip Past Their Eagle Eyes?
Nothing found :(
Try something else