You are using an outdated browser. Please upgrade your browser to improve your experience.
by Alexander Vaughn
October 4, 2010
Apple has been clear that, unfortunately, for processing speed reasons, our older iDevices like the iPhone 3G or iPod touch 2G won't be getting many of the present and upcoming iOS 4 features. Not to mention the iPhone 2G and the first iPod touch, for which all support has been now discontinued. To correct an error, and also remind us, Apple has recently updated its website and deleted the iPod touch 2G from the list of devices that will support AirPrint (as noted by 9to5mac). AirPrint will only work on devices that can multitask. Therefore, you won't be able to print directly from your iPod touch 2G natively, and it's the same story for the iPhone 3G. It's unfortunate, as the iPhone 3G was available for sale just a few months ago, unlike the 2G iPod touch, which was discontinued quite a while ago. If you have one of the unsupported models, you can always try to rely on one of a number of apps that let you print, they may not work as well, but it's still better than nothing. The unfortunate corollary here is that I'm confident and afraid that it will be the same story with AirPlay. AirPlay is Apple's new streaming feature that allows you to stream music, photos and movies anywhere directly from your iDevice. AirPlay, which runs in the background, also depends on multitasking and our older devices will very likely not be getting this feature either. It's more problematic, as it's a more attractive, and convenient feature on a daily basis, and there are no app alternatives for it. Nevertheless, I'm not sure we can really blame Apple, as these older devices simply can't cope with the processor demands of these features. Also, note that everything can still change, but after multitasking, AirPrint and Game Center, don't keep your hopes too high. In short, if you're planning to print or stream from your iDevice, it better be recent or you'll be out of luck. 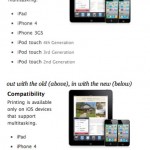 No AirPrint & AirPlay For Legacy iDevices

No AirPrint & AirPlay For Legacy iDevices
Nothing found :(
Try something else