You are using an outdated browser. Please upgrade your browser to improve your experience.
by Alexander Vaughn
October 5, 2010
Our desire to run apps on Apple TV is becoming more of a reality today, as we're hearing yet another important step has just been taken. As reported by Gizmodo, iPhone developer Steven Troughton-Smith has announced, via Twitter, that he has already found a way to install apps on his Apple TV. He claims it's quite simple. Apparently it is possible to add an Apple TV to Apple's provisioning portal just like any other iDevice. He claims that by tweaking some settings, he can install his own apps directly on the device without any issues. He even included the above screenshot from iPhone explorer (which also works just fine on Apple TV) to prove his accomplishment. The problem is that Apple TV doesn't presently have any way to launch third-party apps (a launcher). So even if someone developed something that could be controlled remotely, we still have no way to launch it. However, since jailbreakers already have access to the entire system, this is probably just a matter of weeks, maybe even days. So yeah, this is very good. Not only did Apple barely do anything to prevent us from installing apps on Apple TV, but they can be programmed using Apple's own development tools. How long will it take for Apple to give this their blessing? We don't know, but we're not going to wait for them. 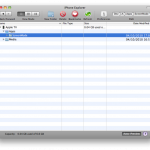 Apple TV Can Install Apps, Now Just Lacks A Way To Launch Them

Apple TV Can Install Apps, Now Just Lacks A Way To Launch Them
Nothing found :(
Try something else