You are using an outdated browser. Please upgrade your browser to improve your experience.
by Alexander Vaughn
October 18, 2010
This most likely won't be much of a surprise to you, but as Apple announced today iDevice sales are through the roof once again. In their fourth quarter results, Apple presented what was their best sales and revenue numbers in the company's history. Besides 3.89 million Macs sold, Apple sold an astonishing 14.1 million iPhones though 166 carriers in 89 countries. Actually, they could have sold way more, but they weren't able to produce them. As you can see in the graph I put together above, this is the most iPhones ever sold in the device's history. Also, the iPad is a hit with 4.19 million units sold, which is more than Mac sales. Margins are down, which shows Apple is really making an effort to make our iDevices less expensive and also because they had to offer us free Bumpers. However, Apple is doing really well overseas, with 57% of Apple's sales now being made outside of the US. All in all, Apple cumulatively sold over 125 million iOS devices so far. A phenomenon that has already drawn in over 200,000 developers. The App Store is doing well too with the aforementioned 200,000 developers active and already over 30,000 iPad apps available. Steve Jobs joined the conference call giving us some more insight regarding Apple's success. In his opinion, both Android and RIM/BlackBerry are doing a terrible job. Also, iPhone sales have now outgrown the BlackBerry. As for the Apple TV, Steve Jobs announced Apple has already sold 250,000 of them. 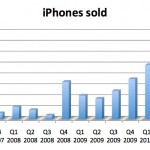 iPhone & iPad Sales Are Through The Roof

iPhone & iPad Sales Are Through The Roof
Nothing found :(
Try something else