You are using an outdated browser. Please upgrade your browser to improve your experience.
by Bryan M. Wolfe
October 12, 2010
If you're using iPhone/iPod touch or iPad apps more often than watching television shows, you're not alone. According to a new report by Flurry, app usage is quickly becoming more popular than watching many of the most highly rated television shows. Flurry, which collects data from consumers to analyze their viewing habits, believes that 19 million users currently use one of Apple's devices. Each user spends an average of 22 minutes each day using an app. At this rate, America's top-rated show, "Dancing With The Stars" accounts for just four million more viewers than app users. According to MobileBeat:

That achievement is pretty staggering, considering that Apple launched its App Store only in July, 2008. The mass consumption of apps on mobile devices has since exploded. Given that most TV series air only 22 episodes per season, the allure for advertisers is clear. Apps are available 365 days a year, making their audience accessible to advertisers 15 times more frequently than TV audiences.

Obviously these numbers are of interest to advertisers, who are always looking for new ways to reach their target audience. For consumers in general, it also shows that television shows aren't nearly as fun and popular as they used to be. Meanwhile, apps, just keep getting bigger and bigger. 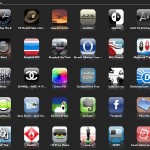