You are using an outdated browser. Please upgrade your browser to improve your experience.
by Felix Xiao
October 27, 2010

A series that debuted in 1995, Worms is a legendary turn based strategy game that has been reproduced on numerous platforms many times. The latest rendition, Worms 2: Armageddon, has just been released and attempts to quench your thirst for cute worms wielding massive rockets in an explosive fight for domination. 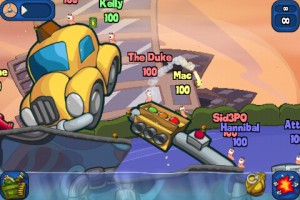 Worms 2 is a universal app and features a variety of game modes powered by over 40 unique weapons. Campaign mode includes 30 levels in 5 different enivronments, from Manhattan to a world full of cheese. An endless body count mode lets you blow up enemy worms in many waves. Just as in the first iPhone port of Worms, a practice mode helps you learn the game against dormant opponents. Quick game mode picks a random map and puts you in the action immediately. The game has 4 player local, 4 player bluetooth, and 2 player online multiplayer options that include 12 modes of play, 4 of which are completely new.

The game has many things to love, especially if you found the first Worms game interesting. For one thing, there's plenty of weapons, from grenades and shotguns to electromagnets and boomerangs. Much of the arsenal from Worms returns, including the sheep, concrete donkey, parachute, and baseball bat. At the start of a level, you have a select number of several weapons, and more can be acquired in the form of in-game crates. These crates fall from the sky after every turn and include weapons or health bonuses. Due to the fact that enemy worms can also take these, the wooden boxes are essential to victory. 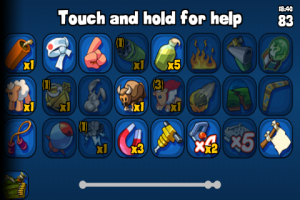 Worms 2 has a plethora of modes that add much replay value to the game. Although the previously available challenge mode is no longer there, the 30 campaign missions more than make up for it. In addition, you can purchase hats, weapons, fortifications, and even dance moves with gold earned during levels. Multiplayer has an insane amount of customization, with 3 difficulties, several AI strategy profiles, and 12 game options, including the new Fort Mode, Forts Pro Mode, and Crazy Crates Mode. Like its predecessor, Worms 2 lets you create your perfect team of worms, with names, hats, and speech banks. This definitely makes the game a lot more fun, especially when paired with the silly cartoon-style graphics and high pitched voice effects. Team17 made sure that the 2nd Worms game included its fair share of explosions, and you'll have fun destroying all the landscapes with a powerful collection of firearms.

Owners of a 4th generation device, prepare to be disappointed, as Worms 2 does not have Retina Display support, despite being released a good 4 months after the iPhone 4. On top of that, fast app switching on iOS 4.0 and up is not supported either, meaning that every press of the home button will result in watching the title screen load for 15-20 seconds again. While there is Plus+ integration, there is no Game Center, and online battles are rare so far, as the game can't seem to find any open matches. 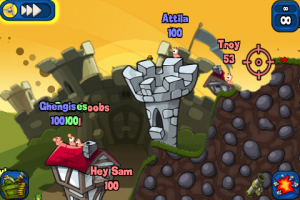 If you adjusted well to the first iPhone installment of the Worms series, you'll be well-prepared to play this game. The text-based tutorial is verbatim from the first game and is confusing to understand. At the start of a level, 5 shaking icons pop up at the bottom of the screen that appear to be for extra customization of the game. Without any text labels, you have to guess at their meanings from the odd images shown. The controls in the series have never been great on the small iPhone screen, and although Worms 2 slightly improves on certain aspects, it's very much the same thing it was before. You won't be able to zoom in as much as you want, aiming is a little weird, and moving your worms as they jump across the environment is frustrating.

Worms 2: Armageddon is a fun game to play because of its many polished weapons and time consuming campaign mode, but feels more like an improved version of the original game rather than a new experience. Many of its current problems, such as Retina Display and multitasking, are easy to fix and will probably be implemented in free updates. Worms 2: Armageddon is worth considering for $4.99 and might just add a boom to your day. 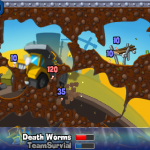 Review: Worms 2: Armageddon - What Happens When Bugs Play With Bombs?

Review: Worms 2: Armageddon - What Happens When Bugs Play With Bombs?
Nothing found :(
Try something else