You are using an outdated browser. Please upgrade your browser to improve your experience.
by Alexander Vaughn
October 18, 2010
After a first appearance at the US patent office, and with enclosures showing up, we're hearing once again about that rumored sideways docking iPad. This time around, Patently Apple spotted another patent application for the concept at the European patent office. This one doesn't tell us anything more than the US patent we've told you about. Yet, as Patently Apple points out, this one was filed very recently; on September 25th. Also, it's signed by Steve Jobs himself, as well as, the great Jonathan Ive. Is there anything to it? We still don't know. Engadget contends that this is nothing more than a prototype idea that never went into production. Nevertheless, it's still a very good idea, and who knows, it might make a comeback in the next generation iPad. What do you think? 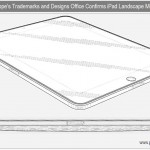 Side Docking iPad Patent Makes Another Appearance In Europe

Side Docking iPad Patent Makes Another Appearance In Europe
Nothing found :(
Try something else