You are using an outdated browser. Please upgrade your browser to improve your experience.
by Alexander Vaughn
October 18, 2010
Following the release of their fourth quarters' sales results, Apple held their traditional conference call with financial analysts today. This time around however, Steve Jobs jumped in on the call, a bit unexpectedly, and we can say that he was on fire. First off, he enlightened us about the Android, and the BlackBerry. In his opinion, while the latter is struggling to remain a viable platform, the former is a catastrophe because it's so fragmented. As he pointed out, Tweetdeck's developers had to struggle making their Android app work on over 100 different versions of Android, an issue that doesn't exist on iOS. In short, he believes Android is going to be quite "a mess." Then he talked about tablets. Steve made it very clear that 7 inch tablets are absolutely no good:

This size isn't sufficient to create great tablet apps, in our opinion. While one could increase the resolution of the display to make up for some of the difference, it is meaningless unless your tablet also includes sandpaper, so that the user can sand down their fingers to around one quarter of their present size.

He ranted for quite a while about it, unfortunately we don't have a full transcript for you yet (we'll update this post when it goes live). In short, however, and quoting him again, 7 inch tablets will be "dead on arrival." So yes, that's the end of the road for the 7 inch iPad rumors. Anything you might have heard about it so far was therefore pure fantasy. Any thoughts? ***Update: The entire conference call, including Steve's historic rant is now available on Apple's website (link). Make sure to check it out. Alternatively you can check out this Youtube excerpt: 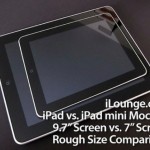 Steve Jobs Sets The Record Straight: There Will Be No 7 inch iPad

Steve Jobs Sets The Record Straight: There Will Be No 7 inch iPad
Nothing found :(
Try something else