You are using an outdated browser. Please upgrade your browser to improve your experience.
by Brenda Balagot
October 25, 2010
Is it a mute switch or orientation lock? That is the question asked by iPad users. The story began in January 2010, before the iPad was released. Apple announced that the switch on the side would be a mute switch, like on the iPhone. When the iPad was released in March 2010, it became the orientation lock. Then with iOS 4.2 beta, the side switch is a mute switch again, and orientation can be locked through a menu item. With all of the changing of functionality, users weren't sure if the switch was there to stay or if it would change again. An iPad user named Robert, as reported by 9to5mac wanted to know about the constant changes to the side switch. He wrote to the one person who could clear up the issue, or any Apple issue for that matter, Steve Jobs:

In IOS 4.2 for iPad is the switch on the side going to be the mute and not screen orientation lock from now on?

Steve, the man who knows how use his words efficiently, cleared up the issue with his answer:

Yep. Sent from my iPhone

Robert also asked about another possibility for this switch, whether we'll be free to customize its behavior; something many were hoping for. So another question was sent to the answer man we know as Steve Jobs:

Are you planning to make that a changeable option?

Steve, staying true to form, cleared up the issue once and for all:

Do you like the switch the way it is now? Or, are you annoyed it will soon become a mute switch again? Tell us in the comments. 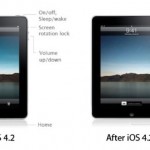 Steve Replies: iPad Mute Switch Is Here To Stay - Won't Be Customizable
Nothing found :(
Try something else