You are using an outdated browser. Please upgrade your browser to improve your experience.
by Bryan M. Wolfe
October 5, 2010
Forget the iPhone. Forget the first DVD players. According to a new report from Bernstein Research, the iPad had the best launch of a consumer technology product in history! After selling three million units in its first 80 days, the iPad is expected to amass sales of 4.5 million units per quarter. This easily dwarfs the one million units sold in the first quarter for the first iPhone in 2007, and the 350,000 units sold in the first year of the DVD player. “The iPad did not seem destined to be a runaway product success straight out of the box,” said Colin McGranahan, retail analyst at Bernstein, in a note. He continued, “By any account, the iPad is a runaway success of unprecedented proportion.” According to a report, published by CNBC:

At this current rate, the iPad will pass gaming hardware and the cellular phone to become the 4th biggest consumer electronics category with estimated sales of more than $9 billion in the U.S. next year, according to Bernstein. TVs, smart phones and notebook PCs are the current three largest categories.

Up until this month, the only places to purchase the iPad in the U.S. had been online (Apple.com), at Apple stores and select Best Buys. Knowing this, I find these numbers absolutely amazing. Now, with all Best Buy stores and Target stores also selling Apple’s device, these numbers will only increase. What do our readers think? What makes the iPad so special? Leave your comments below. 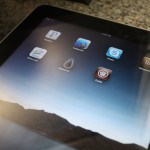 Survey: iPad Adoption Rate Bests That Of First DVD Players
Nothing found :(
Try something else