You are using an outdated browser. Please upgrade your browser to improve your experience.
by Alexander Vaughn
October 6, 2010
I've told you about my distrust for financial analysts when it comes to telling us about upcoming Apple products. Their track record is terrible, and leaks from parts makers are usually unreliable as well. If Apple ever leaks anything to the press, they have a special way of doing it. They have someone on the product team call either The Wall Street Journal or The New York Times, and give them a few little details. The Wall Street Journal is at it again today, reporting that :

"Apple Inc. plans to begin mass producing a new iPhone by the end of 2010 that would allow Verizon Wireless to sell the smartphone early next year, said people briefed by Apple."

I think there might actually be something to it. It's also consistent with a lot of rumors we've previously reported. Also, the WSJ teases us further by telling us about an obvious, but also exciting piece of news:

"Separately, Apple is also developing a new iPhone model, said people briefed on the matter. One person familiar with the new iPhone plan said the fifth-generation iPhone will be a different form factor from those that are currently available."

Of course, a new iPhone coming next year is a given. However, a new form factor seems like a bit of a stretch. At this point I don't see how Apple could make the present iPhone even better. So, maybe completely changing the form factor could be a possibility at this point? With Android going strong, Apple will have to make the iPhone available on other carriers in the US. To give you some perspective: in Europe, where you can pick between the iPhone and Android on any carrier, people prefer the iPhone at about a 2:1 rate. In the US, with AT&T as the exclusive carrier, Android is now outselling the iPhone. What are your thoughts? 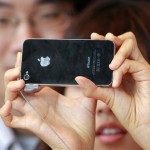 WSJ: The Verizon iPhone Is Coming & New iPhone Form Factor
Nothing found :(
Try something else