You are using an outdated browser. Please upgrade your browser to improve your experience.
by Alexander Vaughn
November 12, 2010
We can now confirm yesterday's rumors that Apple is delaying iOS 4.2 by at least another week. As speculated, Apple has just released a second final beta version of iOS 4.2 for iPad, which should fix the Wi-Fi issues the last version had. It's unprecedented, but this is actually the very reason why Apple releases these Gold Master versions to developers before they go public; to discover last minute bugs. I know, we're all desperate for a public release, and this additional delay is bad news. However, you'll probably be much happier to have a fully working version next week, right? From what we know, there is absolutely nothing new in this version besides the improved Wi-Fi support. Move along, and come back next week for the public release, hopefully. 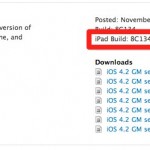 Apple Releases Second GM Build Of iOS 4.2 For iPad
Nothing found :(
Try something else