You are using an outdated browser. Please upgrade your browser to improve your experience.
by Alexander Vaughn
November 18, 2010
Surprise, surprise! While we were all waiting for Apple to finally release iOS 4.2 to the general public, apparently it still isn't ready. Just moments ago, Apple released a third iOS 4.2 GM version to developers. It's called iOS 4.2.1, and while we don't know what it's bringing, we're trying to find out as soon as possible. While we're trying to get you all the details, MacStories is reporting that according to their sources:

It's very likely that this might have something to do with the bugs reported by Line2 earlier today. As for when Apple will finally release iOS 4.2 to the general public, this new GM release is obviously bad news, as it means we'll have to wait a bit longer. MacStories believes it should finally come next week. Yet, at this point, we really can't know for sure. ***Update: From what we're seeing and hearing, this new version only fixes some last minute bugs and no new features have been added. Hopefully, they've got it right this time, and will be releasing it to the public very soon. As usual, we'll keep you posted in case of any developments. 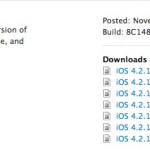 Apple Releases iOS 4.2.1 GM To Developers
Nothing found :(
Try something else