You are using an outdated browser. Please upgrade your browser to improve your experience.
by Tyler Tschida
November 1, 2010
With a new month comes a new reason to fire up Lima Sky's "insanely addictive" endless jumping game, Doodle Jump, thanks to an update that adds Game Center integration, albeit in limited form. 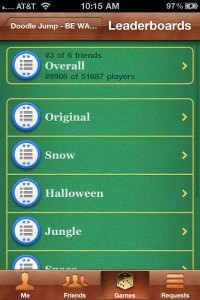 Doodle Jump now features leaderboards provided by Apple's Game Center.  A unified friend leaderboard is available within the game itself, or you can hop into the built-in Game Center app to view separate leaderboards for each theme, which include the original, snow, Halloween, jungle, space, soccer, and underwater. An overall leaderboard is also available from within the Game Center app. Sadly, this update doesn't bring any achievements to the table.  It also doesn't provide any form of multiplayer, which was teased near the beginning of October, so it looks like Doodle Jump fans still have a lot more to look forward to. Doodle Jump is available, as always, for $.99. 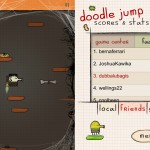 Doodle Jump Updated With Limited Game Center Integration
Nothing found :(
Try something else