You are using an outdated browser. Please upgrade your browser to improve your experience.
by Alexander Vaughn
November 1, 2010
It's tough to imagine what Apple will do next with the iPhone that isn't simply an incremental update. One major technological advancement Apple hasn't made yet is: Near Field Communication. That is, implementing RFID chips or similar technology in the iPhone, that will allow it to easily communicate with surrounding devices. It's already very popular in certain parts of the world, and applications for NFC's are very interesting. For example, using a mobile payment app, you could simply swipe your cellphone against a subway ticket machine to pay for your ride. If you give developers access to these chips, who knows where they would be able to take it. We've seen many signs that Apple is working on this technology. According to Cult of Mac, they might be planning to take this to a whole different level. Namely, remote computing. According to Leander Kahney's sources:

"a NFC iPhone will allow users to carry a lot of their desktop data and settings with them — and load that data onto a compatible Mac. If users wave a NFC-equipped iPhone at a NFC Mac (they need to be in close proximity to interact), the Mac will load all their applications, settings and data. It will be as though they are sitting at their own machine at home or work. When the user leaves, and the NFC-equipped iPhone is out of range, the host machine returns to its previous state."

Apparently, this would embody all your passwords, settings, contacts, bookmarks and maybe even website authentication credentials. Of course, it will take some cloud-service/online file storage like MobileMe and Back-to-the-Mac to also make your files available. All the settings and sensitive files would, however, remain stored on the iPhone to avoid any security issues. The concept itself is a good one, and while having your own files and applications available on any Mac will be a big challenge, it won't be hard to make at least your basic settings available. The use case however isn't that big. How often did you find yourself in front of a different Mac, and wish you could turn it temporarily into yours? Nevertheless, it would be interesting to have such an option. Is there any truth behind this rumor? We don't know. The technology is available and that would definitely be a nice big enhancement for the next iPhone. What do you think? [Image Credit: Patently Apple] 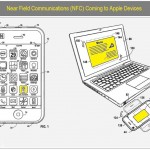 Rumor: iPhone 5 To Turn Any Mac Into Your Own Using NFC

Rumor: iPhone 5 To Turn Any Mac Into Your Own Using NFC
Nothing found :(
Try something else