You are using an outdated browser. Please upgrade your browser to improve your experience.
by Tim Chaten
November 8, 2010
Sprint has been a fan of unofficially adding their data plans to iOS devices. Earlier this year Sprint gave away iPad cases with a slot for their 4G Overdrive. The new ZTE Peel has been confirmed to launch within the month. Boy Genius Reports has managed to grab a snapshot of the launch day information. The Peel is a case for the iPod touch that turns your iPod into a mobile hotspot. It should be available on November 14th, 2010. The no contract, 1GB, $30 a month plan is an okay option for those looking to add mobile data to their iPod touch. The cost of the device itself is $79. The battery life is currently unknown (typically MiFis run for four to five hours max.) 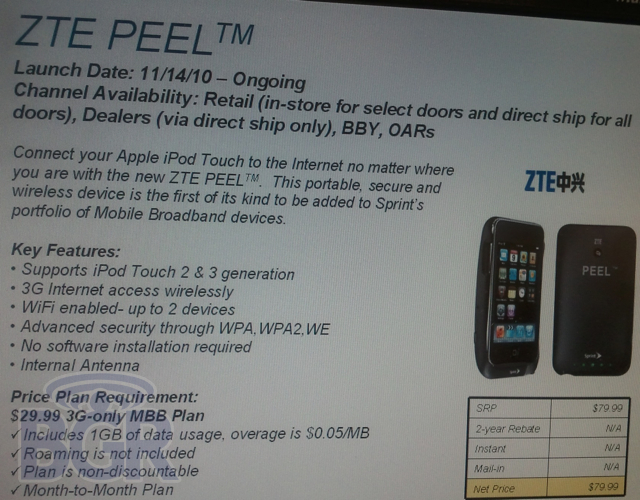 It will be interesting to see how the case works. The dock connector appears to charge the iPod, but that would also reduce the run time of the Peel. Those with multiple devices will be glad to hear that you can use the Peel on up to two devices at the same time. The Peel seems to be designed for older iPod touches and works with the second and third generations. Fourth generation users will have problems using the Peel due to the rear camera and mic. The Peel is a compromise. Do you choose to have the camera or mobile data? What could have been a great Skype or FaceTime case simply falls short. You can use a headset, but many people bought the newer iPod touch to utilize the built-in mic that would be rendered useless by the Peel. It is exciting to see companies embrace the iPod touch, but I would have loved to see them incorporate the current models into this case. The data plans are also a bit on the expensive side with Verizon now offering a 1GB iPad plan for $20 a month. It is also odd limiting use to just two devices at a time. Will you be picking up a ZTE Peel once it hits the streets? Let us know in the comments below! 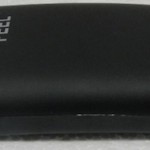