You are using an outdated browser. Please upgrade your browser to improve your experience.
by Alexander Vaughn
November 10, 2010
Right now iOS 4.2, is in it's GM version, and is almost ready to ship, but there are still some little things missing. For one, there is the video part of AirPlay, which nobody has seen yet. Then, there is AirPrint. AirPrint, Apple's new wireless printing feature already works, and you might have even seen it on video. Yet, the most common use scenario, that is using a printer shared with your Mac or PC, is a tough one to pull off. You need a special build of Mac OS, and all kinds of settings. Even then, it's pretty much hit or miss. We haven't worried about it so far, as these were all developer beta versions of the system that we've been using. Unfortunately, we're now hearing some very serious rumors that Apple still hasn't gotten it working, and is scraping the feature completely. As Macstories noticed, Apple removed any reference to the possibility of "AirPrinting" to a shared printer. Also, they are supposedly notifying developers independently. So to be clear, Apple is not canceling AirPrint completely, as you'll still be able to print from iOS to certain AirPrint-enabled printers. For example, some HP models, as well as ones directly shared on the network (but not tcp/ip printers unfortunately). However, if your printer is connected to your PC or Mac, it's very likely you will not be able to use it from your iPad. Hopefully, this is just a temporary setback while they're working on making it as simple and perfect as they can. In the meantime, the feature will be of limited use to many of us. Let's just hope Apple doesn't do the same with AirPlay. What do you think? 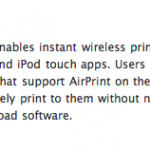