You are using an outdated browser. Please upgrade your browser to improve your experience.
by Bryan M. Wolfe
November 18, 2010
Steve Wozniak recently made some interesting comments. Speaking to the Dutch-language De Telegraaf newspaper in The Netherlands, the co-founder of Apple said he believes Google’s Android will beat iOS as a platform. According to Engadget:

Woz then moved on to the topic of Android saying that Android smartphones, not the iPhone, would become dominant, noting that the Google OS is likely to win the race similarly to the way that Windows ultimately dominated the PC world. Woz stressed that the iPhone, "Has very few weak points. There aren't any real complaints and problems. In terms of quality, the iPhone is leading." However, he then conceded that, "Android phones have more features," and offer more choice for more people. Eventually, he thinks that Android quality, consistency, and user satisfaction will match iOS.

Interesting comments from a guy that knows a thing or two about the company he co-founded. Still, just because he said it, doesn’t make it so. What do you think? Will Android dominate iOS? Leave your comments below. 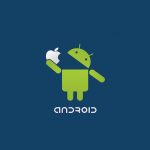 Woz: Android Will Beat iOS In Long Run
Nothing found :(
Try something else