You are using an outdated browser. Please upgrade your browser to improve your experience.
by Alexander Vaughn
December 31, 2010
We felt pretty confident that the iPad was going to be the hit toy this Christmas season. Further proof that we put our money where our mouth is; we even launched a starter iPad app for the occasion. Now that Christmas is behind us, we're all wondering: Did our prediction come true? While we're still waiting for the official sales results that Apple will report at the end of the month, Fortune's Philip Elmer-DeWitt picked up the phone and called some analysts to see what they think. We usually don't give analysts much credit as comparing serial numbers and surveying people outside of malls only gets you so far. However, DeWitt surveyed 26 analysts, and hopefully, that will shed some light on those iPad sales. 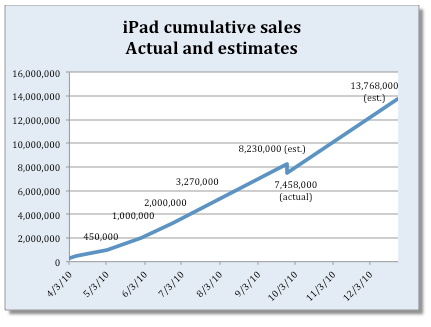 According to the experts, Apple will have sold another 6.31 million iPads between October 1, 2010 and December 31, 2010. For comparison, that is a bit more than the average number Apple usually sells (as you can see in the graph above), but certainly not the out-of-this-world, big bang iPad revolution we all expected. Of course, they could be wrong. We haven't heard of any supply shortage over the holidays, but after all, $500 might be a bit much to put under the tree. Yet, for a product that was launched eight months ago, and is rumored to be replaced any time now, it's not bad. What do you think? 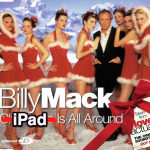 How Huge Was The iPad This Christmas?

How Huge Was The iPad This Christmas?
Nothing found :(
Try something else