You are using an outdated browser. Please upgrade your browser to improve your experience.
by Tyler Tschida
January 14, 2011
Apple has revealed that nearly 10 billion apps have now been downloaded from the App Store worldwide, and they are celebrating this grand milestone with a contest. The countdown is rather similar to the one Apple held for the iTunes Store's 10 billionth song download and can be found at the bottom of their homepage.

As of today, nearly 10 billion apps have been downloaded from the App Store worldwide. Which is almost as amazing as the apps themselves. So we want to say thanks. Download the 10 billionth app, and you could win a US $10,000 iTunes Gift Card. Just visit the App Store, and download what could be your best app yet.

If you are lucky enough to be the person who downloads the 10 billionth app, you could win a $10,000 iTunes Gift Card!  But you don't actually have to download an app if you don't want to; instead, you can simply fill out the alternate entry form.  You are allowed up to 25 combined contest entries per day. Apple officially opened the App Store on July 10th, 2008, which means it will have only taken around two and a half years to reach this milestone.  In comparison, Apple launched the iTunes Store in April 2003, and it was only in February 2010 that it reached the same milestone. 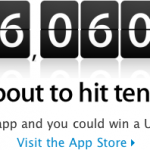 Nearly 10 Billion Apps Have Been Downloaded From The App Store, Apple Celebrates With A Contest

Nearly 10 Billion Apps Have Been Downloaded From The App Store, Apple Celebrates With A Contest
Nothing found :(
Try something else