You are using an outdated browser. Please upgrade your browser to improve your experience.
by Alexander Vaughn
January 27, 2011
Rupert Murdoch's long rumored "The Daily" iPad newspaper created in collaboration with Apple just got an official launch date. In an invitation sent to the press recently (according to the loop), News Corp and Apple are inviting the press to a special launch event that will take place next Tuesday, February 2, in New York City. Unlike what is customary with Apple, the invitation clearly states the goal of the event; unveiling News Corporation's new iPad-only publication that you've heard so much about. Despite their involvement with the project, there apparently will be no high profile representative from Apple attending. According to the invitation, Apple is just sending their Vice President of Internet Services, Eddy Cue to help introduce the newspaper. So what will they unveil? We don't have a lot of details right now. What we do know is that it will be a highly graphical daily publication, with a touch of Apple design. Furthermore, rumors are stating that the publication will utilize a new delivery and pricing system that Apple will introduce. This will reportedly allow the app to get refreshed in the background, and charge users a recurring subscription fee of $.99 per week. As usual, we'll be keeping tabs on the event and we'll keep you posted as soon as we have more information. 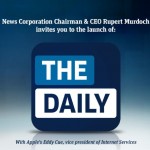 Apple & News Corp. Holding A Special Launch Event For The Daily On February 2

Apple & News Corp. Holding A Special Launch Event For The Daily On February 2
Nothing found :(
Try something else