You are using an outdated browser. Please upgrade your browser to improve your experience.
by Alexander Vaughn
January 19, 2011
Just one week after the first one, Apple has just released (to the members of its iOS developer program) a new beta version of iOS 4.3. Besides making the system a bit snappier, it doesn't seem like Apple added any new features in this release. However, they did release some worrisome details. According to Mark Gurman, Apple informed developers that those sweet multi touch gestures we told you about last week are still present, but will not be released to the public:

This feature will not be enabled in iOS 4.3 for customers, but we are providing this preview to gather input on how these gestures work with your apps.

That's unfortunate. I've been playing with these for a week, and let me tell you; with multi touch and multitasking, the iPad is a whole new device. It's particularly life changing when you have to produce something using your iPad (like let's say... blog posts). Fortunately, it's still present in this version and hopefully Apple will rethink this before releasing iOS 4.3. 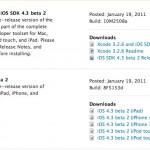