You are using an outdated browser. Please upgrade your browser to improve your experience.
by Alexander Vaughn
January 7, 2011
Fans of iOS development, apps and humorous geeky sitcoms, we've got something that will, without a doubt, make your day. In case you missed it, the nerdy cast of the excellent Big Bang Theory dedicated last night's entire episode to making their own iOS app. The episode is hilarious. What's more, the guys behind the show really tried to make the creation of their "differential equation solver app that can read your handwriting" appear as real as possible. This included Objective-C code written all over the apartment, as well as mock UI (user interface) concepts. This is awesome, as it once again shows the incredible effect Apple's App Store is having on making software development more mainstream, and dare I say it, cool. So, if you haven't already seen the episode, it's called "The Bus Pants Utilization," and is available to watch for free in streaming format from CBS' website (in Flash and in the US only). Be sure to check it out. 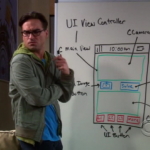 The Big Bang Theory Makes iOS Development Funnier Than Ever

The Big Bang Theory Makes iOS Development Funnier Than Ever
Nothing found :(
Try something else