You are using an outdated browser. Please upgrade your browser to improve your experience.
by Alexander Vaughn
January 31, 2011
After rumors surrounding a possible SD slot, embedded cameras and NFC capabilities, this week's round of iPad 2 rumors is going back to the screen. Once again, our hopes of seeing the next iPad boast a high resolution display are crushed, today it's by a Taiwanese analyst quoted by AppleInsider. Apparently, the price of hitting such high resolutions is still prohibitive for Apple. Yet, there will be some major improvements. First of all, Apple figured out a way to make the screen thinner. As you probably noticed, the current iPad's screen is particularly thick and heavy. The reason for that is the glass screen had to be made much thicker than the iPhone's to resist the pressure your fingers put on it, especially in the middle (it's a physics thing). Apple apparently managed to cut this thickness by about 35 percent, which might allow us finally use the device comfortably with one hand. Further, Apple has reportedly figured out how to make the screen less reflective. As you know, the current iPad is virtually unusable in bright sunlight. Will Apple be making the screen with a more matte surface, or will they coat it with some magic chemicals? We don't know, we just hope it's effective. While they're at it, we also hope they'll be making the iPad's glass oleophobic, like the iPhone. It's currently a bit of a struggle to keep the screen clean, especially if you tend to have greasy fingers. What are you hoping for in the next iPad? 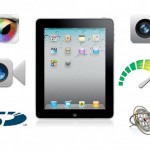 iPad 2 Rumors Take #235 - The Thin Anti-Reflective Screen
Nothing found :(
Try something else