You are using an outdated browser. Please upgrade your browser to improve your experience.
by Felix Xiao
January 14, 2011

These days, it seems like many new iOS releases reiterate the same concepts and blend in with hundreds of already existing games. Forsaken Media takes a different approach in Bug Heroes, combining elements from 3 popular genres to create a full-scale insect adventure. 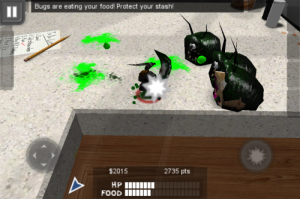 In Bug Heroes, you play as 3 bugs, each with their special abilities, in an attempt to survive for as long as possible. In order to see another day, your creature must defend a stash of food while collecting more tasty bits and fighting off competition. Your character will level up after completing missions and killing other bugs, allowing you to earn money and utilize more than 30 abilities and weapons. To protect your secret stash, you can purchase, place, and upgrade 7 types of towers.

Forsaken Media did a fine job of blending genres well, and the game contains survival, castle defense, and RPG characteristics with a lot of content. There are weapons for you to wield, attributes to improve, insect skills to learn, and upgrades to purchase. Every play-through is endless and goes on until you die or run out of food. Along the way, there are optional side quests that you can accept to either earn or lose money. 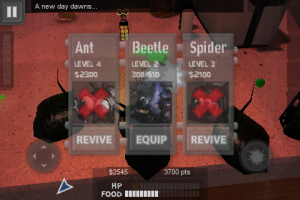 Much of the beauty in Bug Heroes lies in the amount of freedom given to the player. You get to decide your own strategy and how you want to play. The 3 characters include the ant (ranged combat, support abilities), beetle (close-range, melee), and spider (speed). By using a bug more, you allow it to gain experience and level up. There's also a lot to keep in mind while playing so that you're never without a task to do. Besides protecting your food stash, you also are required to gather additional food, build protective towers, feed heroes to replenish health, and kill all the bugs you encounter. After playing the game for a few minutes, you'll learn that a day goes by very quickly when you're a 6-legged creature. The game includes day/night cycles and superb lighting effects that change every few minutes or so. It's convenient to have 3 playable characters, as the game doesn't end when one of them dies. You then have the option to revive it at any time using a handsome sum of money or simply play on with the remaining bugs.

There are several things about Bug Heroes that can get really annoying and might make you want to stop playing. It really feels like your character should be able to move a little faster, especially since some of the environments are on the big side. Without an adequate defense system, it becomes frustrating when bugs spawn behind you on a certain round and immediately steal all your food. The game is simply too slow, and much of your time will be spent navigating around the map without doing much. 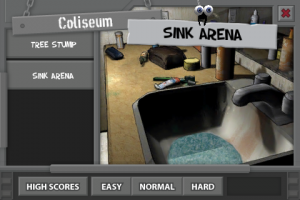 While the movement controls work well, the attack controls aren't very impressive. An auto-aim option makes things slightly better, but it's still hard to use any character other than the ant to effectively kill other insects. The game gets become really repetitive, and it's hard to get very far into a game. When other creatures attack you, it's also seemingly hard to dodge bullets for some reason. The side quests are a great part of the game, but will often cost you because they sometimes prompt you to do things that you can't do yet. Each one has a time limit, so you end up losing the points you invested. Other than the lighting, the graphics are not exemplary either. Bug Heroes lacks the Game Center achievements and leaderboards that most major recently-released titles have.

It's nice to see iOS developers experimenting with and blending flavors of gaming to create new titles. Bug Heroes does provide a lot of content, and for fans of endless survival, castle defense, and RPG, it should be a fun experience. However, the general slowness of gameplay and poorly implemented attack controls prevent it from being as good as it should be. Bug Heroes is worth considering for $1.99 and will show you how intense a bug's life really is. 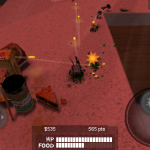 Review: Bug Heroes - Prioritize To Survive
Nothing found :(
Try something else