You are using an outdated browser. Please upgrade your browser to improve your experience.
by Tyler Tschida
January 13, 2011
Steve Jobs isn't one to cave under pressure, whether it's from the media, other tech companies, or even the most fervent of Apple users.  However, with the release of iOS 4.3 beta, it appears that he has made a very un-Steve-like move.  He has decided to go back on his declaration from late last year and has allowed Apple's iOS development team to restore the ability to lock the iPad's screen orientation using the physical switch on the side of the device.  iPad users, rejoice! The orientation lock switch story is a bit of a long and winding one, especially when you consider that it's all concerning a little black piece of metal on the side of the iPad, but it's a story worth telling. Well before the iPad even launched, Apple released documentation on its website that revealed a little black switch above the volume buttons on the side of the iPad.  That switch was intended to be a mute switch, just like the one on the iPhone.  Well, not long after that -- and still a month before the device was even available -- Apple changed the documentation to reflect a change in the functionality of the switch.  Now it was to become a screen orientation lock switch. Months went by and iPad users came to find the orientation lock switch to be a really handy addition to the overall functionality of the device.  Well, Steve and the rest of the Apple team didn't feel the same way.  The introduction of iOS 4.2 changed that little black piece of metal into a mute switch, just as it was originally intended to be.  Apple still provided a screen orientation lock option, only now it was a button located in the multitasking tray. When asked if Apple would offer an option to toggle between the two instead of forcing everyone to use the switch as a mute switch, Steve simply replied, "Nope." This lead some developers to create their own solutions, but of course, they could only be offered to the jailbreak community.  And that, at least we thought, was the end of the story. Today, however, it appears Steve Jobs has miraculously changed his mind, and we couldn't possibly be happier.  The iOS 4.3 beta contains a brand new section within Settings with the heading "Use Side Switch to:" and the options of "Mute" or "Lock Rotation."  No matter which you choose, the opposite will be available as a button in the multitasking tray. Sure, it's a very small change, but it's one that is long overdue, or at least in this humble bloggers opinion.  What do you think?  Have you gotten used to the switch as is, or are you already growing impatient for iOS 4.3's official release so you can get your screen orientation lock switch back? 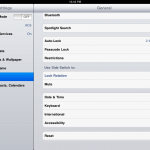 Steve Jobs Flip-Flops On The iPad's Orientation Lock Switch
Nothing found :(
Try something else