You are using an outdated browser. Please upgrade your browser to improve your experience.
by Alexander Vaughn
February 11, 2011
The Verizon iPhone might have only gone on general sale yesterday, but one analytics company didn't wait to try to answer the question in everyone's mind; how well is it doing? Interested in the popularity of the new device, and probably looking for some easy promotion, Chitikia Insights put up a real time tracker on their site. It shows the split between requests (data is based on iPhones across the Chitika advertising network) they're receiving from AT&T and Verizon iPhones. Surprisingly, they claim that already three percent of their requests come from Verizon iPhones. If you consider AT&T sold about 15 million iPhones in 2010, plus let's say an extra seven million leftovers from the past, that would represent almost 600,000 Verizon iPhones already sold, which isn't bad at all. Of course, we don't know how accurate or representative their numbers are. Yet, it will be interesting to see how these numbers evolve in the next couple of months. So check them out. 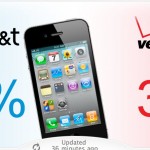