You are using an outdated browser. Please upgrade your browser to improve your experience.
by Alexander Vaughn
February 9, 2011
Moments ago, HP finally entered the tablet war with both feet by introducing the TouchPad, the first real offspring of HP's Palm acquisition. By curiosity, we've been following some of the liveblogs covering the event, and we had the pleasant surprise to hear about some interesting new ideas HP is bringing to the tablet table (the Palm brand has apparently been retired, RIP). I wouldn't be surprised for some of these to become standards, and who knows, make it to iOS. So let me tell you about them.

While MobileMe can be very convenient to keep your iPad and iPhone synched, we all know that Apple is not going far enough with this. It seems like HP is putting a major effort on that sphere, first using cloud-based solutions, but most of all by letting its device communicate with each other. For example, when paired with a Pre, the TouchPad will allow you to read and respond to text messages that arrived on the phone directly from the tablet. It's a great idea, and it could go so much further. It reminds me of what the jailbreak app MyWI is already doing now, by allowing your iPad to tell your iPhone it needs a data connection, which in turn will activate the hotspot feature. There is so much potential in integration, and HP has just took it one step further. We'd love for Apple to do the same.

One great example of this tight integration is something HP calls Touch-To-Share. It involves making an actual "tap", or light physical contact between the two devices to share their current state in certain applications. For example, if you're reading a website on your TouchPad and tap your pre on it, the current url will be sent to the phone and displayed; very neat.

If there is one thing Palm has always had the edge on Apple when it comes to its platform, is multitasking. Of course, Apple is catching up, with multitasking on all of its devices now, and even gestures in the iOS 4.3 beta. Yet, HP is taking this even further with a system of cards and stacks. That is, on top of letting apps really run in the background, the ones that are related are grouped. For example, if you follow a link from the mail app to the browser, the browser app will stack up on top of mail, and make it easier to go back. Apps don't just run separately independent of each other. Also, their animation and UI for the feature looks very interesting.

With the TouchPad, HP is also trying to fix notifications. Not only these will be exchanged between phones and tablets, but they will also be displayed on screen, in a Growl-like popup known to Mac users and won't force themselves in your face like the iOS ones. With our tablets being always more connected, this would be a very nice thing to have. All in all, it's clear that HP/Palm has really put the focus on areas where Apple isn't doing so well. That is integration, cloud, multitasking and notifications, not to mention the TouchPad's support of Flash. Well, while the TouchPad won't be released before the summer, and hasn't been priced yet, it's good to see some competition. Hopefully Apple will take note of their ideas, and push them even further on iOS. Now that FaceTime is a given, what else would you like Apple to bring to the iPad? [Image Credit: Engadget] 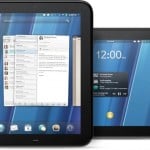 What Apple Can Learn From The HP TouchPad

What Apple Can Learn From The HP TouchPad
Nothing found :(
Try something else