You are using an outdated browser. Please upgrade your browser to improve your experience.
by Alexander Vaughn
February 9, 2011
Apple was very clear when the story about the iPhone 4's abnormally sensitive antenna came out this summer; it's an industry-wide problem, which can't be fixed. Yet, when Apple released the Verizon iPhone featuring a new Antenna design, we were wondering if that design change wasn't also aimed towards fixing the antenna. Especially since Apple had to change the bumpers to adapt to this system, which suggested they modified this design after the AntennaGate scandal:

The antenna is now split in more sections, and some buttons have been relocated, as you can see in the image above. Officially, the antenna redesign only has to do with the fact that this new iPhone works on CDMA networks. Yet, the increased number of separate parts make us think the antenna issues of the AT&T iPhone 4 had something to do with this redesign.

Now that the Verizon iPhone is out there (our review), you're probably wondering how it handles that legendary death-grip. Well, the folks at iLounge did some tests and as you'll see in their video, the issue is just as real. So what happened? It seems like Apple did tell us the truth all along and there really isn't much of a problem. They had the chance to update the design, and did, but without much of an effect. The conspiracy theorists will say they kept the issue on purpose, to avoid admitting to the problem. Yet, it seems like the only truth is that squizing your iPhone will cost you some signal. 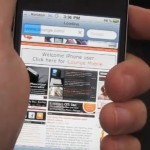 Death Grip Signal Attenuation Still A Reality With The Verizon iPhone
Nothing found :(
Try something else