You are using an outdated browser. Please upgrade your browser to improve your experience.
by Jace
February 4, 2011
Spring 2011. This is the time frame that the company Final Draft has teasingly broadcast to their users that their long awaited app will finally come to be. Final Draft is the industry standard for outputting professionally formatted screenplays for TV/Film. The dreaded .FDX file extension that can only be edited on a computer has brought every screenwriter to tears at one point and time in their career, but those days will hopefully be behind the unsung silver screen heroes. Ever since the iPad’s launch in April, Hollywood screenwriters have been frothing at the mouth for a Final Draft app to solve this problem. Post launch the company sent out a survey to select individuals to help research what it is that their users want. Almost a year later they are promising seamless transition between the computer, iPad, and iPhone, as well as the ability to make edits and quick notes. “Why is this the bestest thing ever,” you may be asking. Well, it is simple. You can now write and edit a “professionally” formatted screenplay on your iDevice, and you can do it quickly. It takes time to get out and boot up your computer, and on a set filled with chaos you don’t always have the best surface to type on. Hopefully Final Draft will deliver the quality product we all have been waiting for, and those pesky set rewrites will be slightly less stressing. Yes, there are other screenwriting apps out there, some of which even support the .FDX file extension, but at the end of the day, like replicants, they should be retired. What features are you hoping will be included? Tell us your thoughts in the comments below. 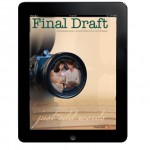 Final Draft Finally Coming To iPad
Nothing found :(
Try something else