You are using an outdated browser. Please upgrade your browser to improve your experience.
by Alexander Vaughn
February 16, 2011
In the big iOS versus Android debate, one statement that often comes up is: Android is doomed. This statement is made despite Android's market share, growth, and growing Android Market (their version of the App Store). Why? Because Android users buy less apps. The corollary is that developers have less of an incentive to develop for the Android platform, unless they use advertising (which happens to be Google's business), and for these reasons iOS will always be more successful. What if we were to put all of this aside, and just consider how apps that rely on advertising do? That's exactly what the mobile advertising agency Mobclix did, and they put their findings together in the graph above. As explained in a blog post, Mobclix compiled revenue per user from popular ad-driven free iOS and Android apps that were downloaded over 500,000 times (or have over 75,000 active users), and have spent at least two weeks in the top 10 of their category. Interestingly, what they discovered is that advertising driven iOS apps seemed to pull in much more revenue per user/month than Android apps. This is despite Google's effort to promote free ad-based apps. Furthermore, we find that utility apps trump both entertainment and games when it comes to generating revenue. Not to mention that you'll be pleasantly surprised by the amount of money a good app can bring in per user based on advertising. All in all, this is bad news for Google, once again. [via iFun] 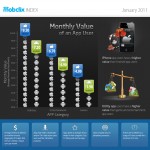 Infographic: Monthly Value Of An App User
Nothing found :(
Try something else