You are using an outdated browser. Please upgrade your browser to improve your experience.
by Samuel L. Lytle
February 10, 2011 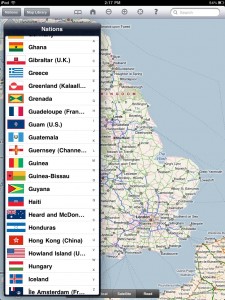 Interactive, online maps have changed our world. (Almost) gone are the days of difficult map folding and now is the time of Google Earth, Satellites and Tom Tom. And though the fancy, gold plated globe may never lose its swagger, physical maps are heading in the direction of the Dodo. World Atlas HD by National Geographic doesn’t save the mutli-colored world map, but it does attempt to fuse the old map world with the dynamic mapping of today.

You can view world maps in four different flavors: Executive, Political, Satellite and (when you zoom in close enough) Road. Political is the standard and is the multi-colored map most common in classrooms. In every version of the maps, each country is separated by hard lines and states are separated by softer lines. Zooming is done using pinch-to-zoom or using zoom buttons. 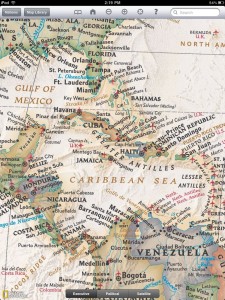 You can search for and bookmark any location. You can also search for individual countries in the Nations tab where they are all listed alphabetically and identified by country flag. When you select one, you are automatically taken to that location and get more information about it including capital, population, area, languages, religions, literacy and life expectancy. Since the colored maps can’t show you much detail, zooming in to about the state level will engage Bing maps. Once Bing maps take over, the experience is very much like the standard Maps app that comes with iOS. 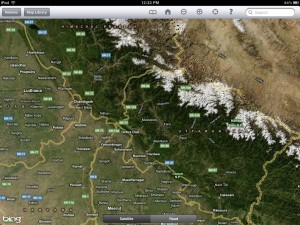 The Good The maps are beautiful and dynamic and you can also download them for offline viewing (the zooming is limited, however). I really can’t think of a better way to quickly overview the world’s geography. The interface is clean and simple and the Nations feature is nice. It seems like the iPad was made for applications such as this. This is the perfect tool for political pundits who need to know where Tajikistan is in relation to Kyrgyzstan while on a CNN panel with Wolf Blitzer. The Bad Bing. There was probably a good reason why Nat Geo chose Bing, but using Google powered maps would probably afford more features (such as street view). 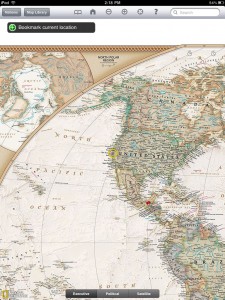 It is disappointing that zooming isn’t more fluid, especially since some of the maps are downloaded and stored on the device. There are also crashing and instability issues that plague the experience. Since the app hasn’t been updated for nearly a year at this point, this is unfortunate and frustrating.

World Atlas HD is beautiful and will be a great addition to your app collection if you are into geography, politics or education. For many, however, the standard Maps app will more than suffice to scratch your geographical itches. 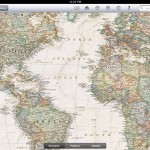 Review: World Atlas HD - Now I Know Where Tajikistan Is

Review: World Atlas HD - Now I Know Where Tajikistan Is
Nothing found :(
Try something else