You are using an outdated browser. Please upgrade your browser to improve your experience.
by Alexander Vaughn
February 10, 2011
It's definitely not as big and as old an Apple rumor as the Verizon iPhone was, but we've heard speculation about Apple releasing a second, smaller iPhone "nano," just like they did for the iPod. We're hearing this rumor again thanks to Bloomberg, who reports that sources familiar with the matter, confirmed to them that Apple is prepping a second, smaller iPhone:

One version would be cheaper and smaller than the most recent iPhone, said a person who has seen a prototype and asked not to be identified because the plans haven’t been made public. Apple also is developing technology that makes it easier to use the iPhone on multiple wireless networks, two people said.

Apparently cheaper, or about $200 without a contract, this new handset would be aimed at Android, which is available in many different form factors, and is often cheaper than the iPhone. Apparently it's not a done deal:

While Apple has aimed to unveil the device near mid-year, the introduction may be delayed or scrapped, the person said. Few Apple employees know the details of the project, the person said. Apple often works on products that do not later get released. The prototype was about one-third smaller than the iPhone 4, said the person, who saw it last year.

Bloomberg's story goes on and rehashes many other rumors we've been hearing, such as the universal SIM and dual GSM/CDMA capability. All in all, this sounds really fishy. We know that Apple doesn't even want to release a smaller iPad, as apparently the user experience is poor on smaller screens. We'd believe the same thing applies to smart phones. Yet, HP/Palm recently released a smaller form factor smart phone, so who knows, maybe that's where the industry is going? What do you think? 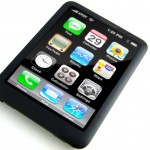 Rumor: Apple To Launch Smaller, Cheaper iPhone
Nothing found :(
Try something else