You are using an outdated browser. Please upgrade your browser to improve your experience.
by Bryan M. Wolfe
February 21, 2011
While we’ve received no official word from Apple, it seems likely an iPad 2 model will be unveiled very soon. U.K.-based TechRadar is reporting T-Mobile and Orange have dropped their iPad pricing, which suggests that the iPad 2 will be with us soon. Vendors typically drop the price of older models in anticipation of the release of a newer model to clear inventory. Orange is now selling the iPad WiF+3G for £99 with a 24-month contract. T-Mobile is offering the same to existing customers. These are not sale prices, but rather the new actual price being offered for the device. Unfortunately, iPad vendors in the United States have yet to offer discounted prices for Apple’s iDevice. Apple is expected to announce the next generation iPad in the next few months. The first iPad was announced in January 2010 and released in April 2010. 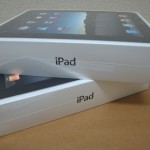 U.K. Orange, T-Mobile Stores Offering iPad Discounts, Suggesting iPad 2 Is On Its Way
Nothing found :(
Try something else